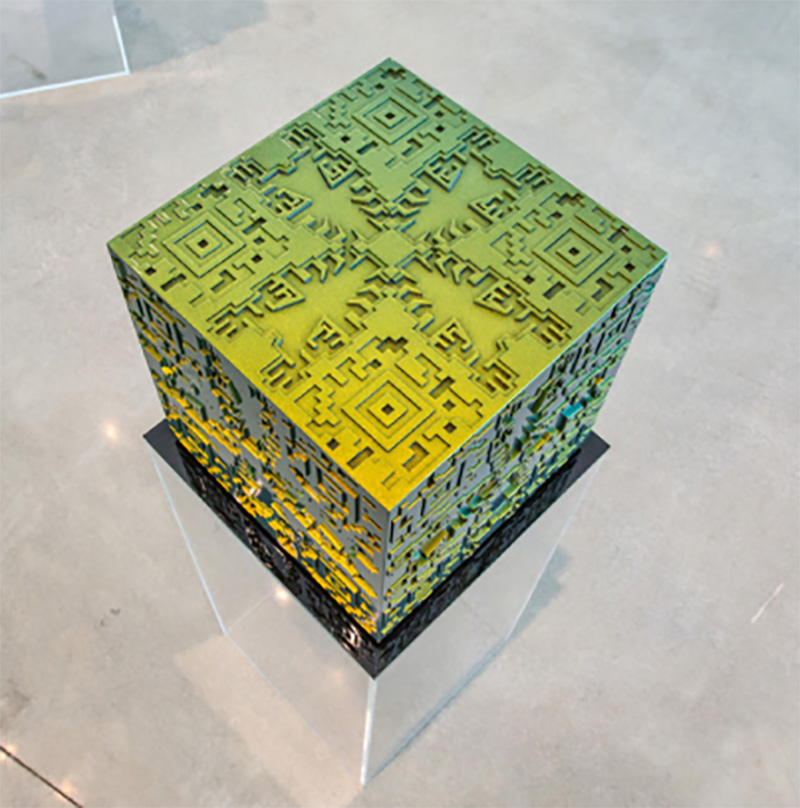 The laser-cut acrylic cubes extend the iconography of Mapuche motifs into stylized sculptural forms that encode culturally-specific signs, such as the Mapuche fertility symbol (Lukutywe), or the word for “power” (Nehuen). Related to these are Mapuche and Acoma-styled textile ‘portals,’ the latter informed by Acoma poet and scholar, Simon Ortiz, featured in the downloaded scans. Taken together, the cubes and the textiles resonate with each other and with the “consciousness of language” that Ortiz and Huinao reference, and which Bert’s project as a whole honors by creating a new symbol system for communicating Indigenous cultural expressions. The brilliance of Bert’s concept lies in its interplay between a ‘digitized identity’ – at risk of theft – and traditional Indigenous art forms deployed to turn expected representations (of language, of culture) inside out, thereby creating a new narrative thread of cultural regeneration.

Bert’s project is also a story archive, giving voice and visuality to present-day Indigenous ritual and poetic life through the electronic scans. But this is not a gimmick. By enlisting the input of Indigenous storytellers and weavers who physically re-insert the codes into traditional design motifs, Bert collapses the duality of Traditional/Contemporary into art forms that enable a new and more urgent conversation to take place.